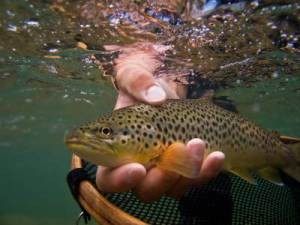 With my changing family dynamic—oldest heading off to college, middle son completely absorbed with friends and social media, youngest taking up tennis—I’ve decided to rekindle an old flame.  No, it’s not another woman…it’s a trout.

Recently, after trading in my old Red Ball waders, Cortland reel, and Cabela’s fishing vest for some new gear, I took an early morning fly fishing lesson—may as well start over with some good habits—at a certain to-remain-unnamed hole just downstream from  a local trout hatchery.

Interesting stream.  Because of the runoff of nutrients from the hatchery above, the midge population—the larval stage of a type of “fly” which makes up to 25% of a trout’s diet—is prolific.  Prolific midges = larger trout.  Paradoxically, the larger trout need to eat a lot, hence, these waters make for some good fishing.  Well, if you can actually note when they strike your fly.  And when they do, set the hook in its mouth.  And then, if you’re lucky enough to do the above, keep the fish on the hook long enough to usher him into your net.

For a couple of hours (where did the time go?), my very patient instructor–shout out to Thomas at Hunter Banks!–watched me and educated me as I frustratingly flailed about the stream without much success, once even catching a fish on a backcast, but failing to land it by keeping my rod tip too low.  Cast after cast after cast….and nothing.  Finally, after figuring out that Western Union wasn’t going to telegraph the message when a trout took my fly, I caught—and landed—a beautiful 14-inch brown trout.  Redeemed!

For the rest of that day and the next, I experienced a sense of relaxation and balance that I’ve missed for a while.  The coolness of the stream, the wafting breeze, the magic of convincing a wily trout into accepting my artificial offering—yeah, I’ll be back out there next Friday morning.