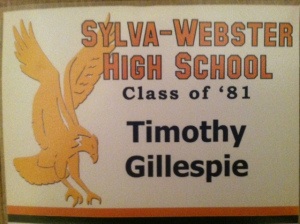 Summer is usually the time for high school reunions, and so it was for mine this past weekend….30th to be exact.  It was fun to see many of my high school classmates, some that I had gone to school with from K – 12, and some I hadn’t seen since graduation.

I grew up in an interesting time and place:  A small Appalachian mountain town in the ‘70’s, close in proximity to a medium-size university in one direction, and the Eastern Band of the Cherokee Nation in the other.  Think Mayberry RFD meets Animal House with a touch of Last of the Mohicans added in for extra flavor.

My graduating class was small, only 165 students—there were probably only 750 in the whole school—so even though there were the inevitable cliques, they were softened by sheer lack of scale.  Added to that, there was just not that much to do socially other than cruise town and go to the movies, so everybody stayed pretty friendly with each other.  I mean, a few eggs and smoke bombs were thrown here and there; at least one food fight that didn’t end so well (for me, anyway), but no lasting damage was intentionally done to anyone’s psyche during our time together.

By my count, over a third of our class showed up at the reunion.  We held it at the plush Harrah’s Casino Hotel and my band—slightly reconfigured with the addition of a few classmate musicians—had the pleasure of providing music for the group.  As the saying goes, a good time had by all.

There’s something very grounding about a high school reunion, and other similar reunions for that matter—college homecomings, church homecomings and the like:  A shared sense of time and place; an appreciation of what was—a sense of community.  They say it takes a
village.  I agree, and sometimes it’s nice to go back to the village to reconnect, especially with those who saw it through the same lens as you.