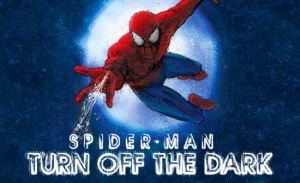 But it’s not Spiderman.

It’s the new choreographer, Chase Brock.  My Office Coordinator, Michelle, left on a train in the middle of night (sounds mysterious, doesn’t it?) to travel up to NYC to see her nephew’s handiwork as “Spiderman: Turn Off the Dark” re-opens after a 3-week hiatus.

Chase, originally from Flat Rock, was the one called in to rework the choreography of the $70 million musical after the show suffered several injuries and negative reviews.  The musical has reportedly been completely revamped to the point where it has been called “almost a brand-new show.”