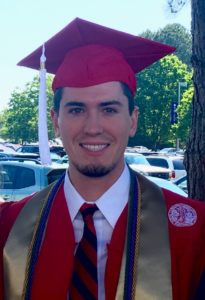 I always knew Matt (nèe Matthew to Mom & Dad), would study business. I knew it from the first week of first grade. That was the week he came home with almost ten dollars from selling pencil grips for a dollar each to his classmates, most of whom he did not know before school started. Betsy had paid two dollars for a pack of ten and Matt took them to school and sold them all save one, which he kept back for himself. His cost basis in this venture was zero, so he was earning pure profit and learning Business 101 all by himself at the tender age of six.

In second grade, we stopped Matt on his way out the door with an overpacked book bag.  When asked about it, we found out he had been selling some of his inventory of stuffed animals for five dollars each to his classmates. We asked him to let us see in the backpack and when he opened it up, a rather large stuffed lion leapt out of the bag, which he said he was selling for ten dollars. Be still my heart.

You just can’t teach some things, and while go get ‘um is something that can certainly be honed, I think mostly it’s innate.  And Matt has it in spades. He graduated from NC State this past weekend with a BSBA degree with a Marketing concentration as well as a minor in Spanish and starts his first job as a newly-minted marketer with a firm in Raleigh in just a couple of weeks. He’s already thinking about buying his first home to develop as a rental and give him a second income stream right out of the gate. I’m one proud dad.  Proud indeed.  Congratulations, Matthew!